This post originally appeared on the CASTAC blog (Committee on the Anthropology of Science, Technology, and Computing). 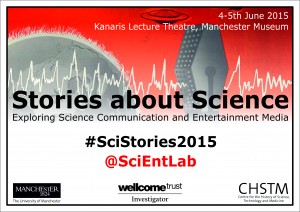 As you read this post, members of a community of like-minded scholars are unwinding after a two-day symposium (Thursday 4 and Friday 5 June) at the UK’s University of Manchester. The Stories About Science – Exploring Science Communication and Entertainment Media symposium explored the intersections of science with entertainment from various disciplinary perspectives and as experienced by a diverse range of publics. Organized through the University of Manchester’s Centre for the History of Science, Technology and Medicine (CHSTM), the SAS symposium was the brainchild of the Playing God Project of CHSTM’s Science and Entertainment Laboratory research group.

So what, you may ask, does any of this have to do with CASTAC (Committee on the Anthropology of Science, Technology, and Computing, part of the General Anthropology Division (GAD) of the American Anthropological Association)? Well, as an anthropologist invested in exploring ethnographically the cultural qualities of humanity’s intersections with science, I was interested in efforts by the symposium’s presenters, not unlike CASTAC’s own, to understand significant cultural aspects of science in contemporary society. Perhaps more intriguingly, I saw it as a potential opportunity to further our goal of fostering discussions between anthropologists and other STS scholars. To that end, I contacted several SAS symposiasts to get a sense of what they presented at SAS. Colloquy topics ran from gender explorations of representations of fictional television scientists to the way legitimate scientists are presented in the media to the power of comics in science communication.

Among the research presented was a paper by Rashel Li of the Australian National University, who reported on her focus group studies of the ways in which gender balance (or imbalance) has been portrayed in science themed film and television. Viewing representations of gender through the lens of the American sitcom, The Big Bang Theory, Li’s work focuses on that show’s discipline-based gender distribution of men in physics and women in biology and its attempts to portray the characters as equally capable in their respective science fields. Li looks specifically at the ways female scientists are portrayed in the show by collecting feedback on the show’s gender representations from adult focus groups. The principal responses of these focus groups ranged from being annoyed by how The Big Bang Theory followed gender-based stereotypes of men in physics and women in biology, to being unaware of the imbalanced gender distribution, to thinking that the show reflected reality and helped humanize science. Perhaps not surprisingly, none of the focus group participants endorsed an imbalanced characterization of scientific capability.

Christopher Herzog (University of Salzburg, Austria) explored in his paper the phenomenon of contemporary neuroscience plays, which highlight the theatre’s unique potential of renegotiating the mind-body problem by having to represent the mental phenomenologically via bodies on stage. Often combined with neuroscientific visualizations of the brain via screen projections, these are theatrical performances in which “deviant minds,” brain pathologies (e.g., anterograde amnesia), and mental illness (e.g., depression) are presented to the public. Arguing against presumed educational or informative functions of science plays and for an epistemically more nuanced understanding of the genre, Herzog contends the plays do not impart scientific ‘facts.’ Ultimately, according to Herzog, “Neuroscience plays are a form of meta-visualization, illustrating how theatre can critically alert us to tendencies in our contemporary culture, and specifically how the forms of presentation (e.g., the dissemination of brain images in mass media) and received-neuroscientific-facts often result in anthropological and social categories of normalcy through recourse to the authority of science.”

Declan Fahy (American University) presented the argument that astrophysicist and public figure Neil deGrasse Tyson illuminates and embodies the enhanced power of scientific celebrity. Using a cultural historical analysis of Tyson’s decades-long public career to demonstrate how he became a scientific star, Fahy argued that Tyson’s fame rests on how he came to symbolize three wider historical movements in post-1960s U.S culture: the rise of the African-American public intellectual, the endeavors to enhance scientific literacy, and the drive to reignite space exploration. Fahy described how Tyson’s star status has earned him social power to spread scientific ideas through wider culture, granted him influence over science policy, the US space program, and astronomical research, and created, as a consequence of his celebrity, a potent form of scientific authority in popular culture. The argument is one Fahy examines in depth in his book, The New Celebrity Scientists: Out of the Lab and Into the Limelight (2015).

In a similar vein, Benjamin Gross, of the Chemical Heritage Foundation (CHF) in Philadelphia, used Neil deGrasse Tyson’s Cosmos: A Spacetime Odyssey as a starting point for his presentation on how a group of scholars and communications personnel at the CHF successfully organized #CosmosChat, a weekly Twitter conversation in 2014 examining Cosmos’s presentation of science and history. Mobilizing CHF’s library and artifact collections, as well as the expertise of in-house research fellows, the tweets critiqued Cosmos and supplemented each episode’s weekly content. Gross discussed the substantive themes that emerged during the course of these critiques and evaluated the potential applicability of the #CosmosChat model to other communication opportunities that lie at the intersection of science and entertainment.

Drawing on two projects aimed at communicating science to young people, Science Comics and Cosmic Comics, Emma Weitkamp of the University of West England presented a paper on comics as science communication. Traditionally seen as purely entertainment media, comics have more recently been employed in science communication. Exploring comics as methods for situating science within our day-to-day activities, Weitkamp poses the question: Can a combination of science, humor, and narrative help to show how science is part of our everyday lives? Weitkamp posits that comic media have strong potential, both as learning aids and as creative ways to place science within society, as their fictional nature allows greater juxtaposition of the real and the imaginary, allowing authors, for example, to pose ‘what if’ questions to their readers; such as, what if the world didn’t physically work the way it does?

The success of SAS was another success for STS. As David A. Kirby, the principal investigator in CHSTM‘s Playing God Project, notes: “science and entertainment represent two of the most powerful cultural institutions that humans have developed to understand and explain their world.” If this is true, the scholars aligned with SAS seem poised to offer some intriguing and potentially synergistic research that could align well with the work of CASTAC scholars.

← Stories About Science: Symposium Round-up
Neuroscientist at a SciComm Conference →