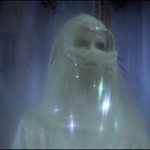 Battlestar Mormonica: Of Gods, Aliens, and Strength Through Technology

When talking about of Battlestar Galactica, science, and religion, one will undoubtedly think of Ronald D. Moore’s re-imagined Battlestar Galactica (BSG) from 2003 rather than its predecessor, Glen A. Larson’s short-lived space opera of 1978. A sci-fi series that was not only uncharacteristically conservative for liberal Hollywood, but has also been regarded as one of the most impressive science fiction… Read more →