This article originally appeared on The Guardian on 24th July 2015 during the last week of the four week revival of Caryl Churchill‘s The Skriker which was performed at the Royal Exchange Theatre as part of the Manchester International Festival 2015.

Caryl Churchill’s postmodern play The Skriker is just about to begin its final week of a sold-out run at Manchester’s Royal Exchange Theatre and its environmentalist message is as worryingly relevant today as when it premièred at the National Theatre twenty-one years ago. This has been a summer of headlines about record-breaking temperatures; according to scientists the Earth as a whole has experienced its hottest June and the hottest first half of the year since records began. The current climate crisis is entwined with a lengthy history of industrialisation, reckless ecological practices, and the environmental movement has been blighted by financial crisis, austerity, and a political and corporate denial of this global catastrophe. Global warming and climate change are unavoidable issues that permeate news media and increasingly fictional media.

‘It’s a clarion call …Maybe it will make people look at what we’re doing on a global scale and how wrong it is.’ – Maxine Peake

Bringing Science to the Stage:

The revival of Caryl Churchill’s apocalyptic 1994 play The Skriker is being led by director Sarah Frankcom and actor Maxine Peake, who plays the shape-shifting titular character. The play anthropomorphises a damaged natural world in the form of an ancient folklore faerie – the Skriker – who reels off playful and often perturbing word association monologues reminiscent of the Northern political punk poetry of John Cooper Clark. It is a theatrical experience, an artwork, and a protest piece that is intended as a provocation rather than linear narrative work. Through movement, music, and a dense dialogue the play connects environmental and mental health issues, and compares a fractured world with individual and societal instability.

Earlier this year I auditioned to be a part of a community choir for The Skriker; an amazing opportunity to be involved in with a professional play at a prestigious Northern arts festival, and, I’ll be honest, the chance to be in close proximity to Maxine Peake who I have adored since she played Twinkle in dinnerladies. I planned to spend my summer as a science communication scholar by day researching the intersection of science and entertainment media, and transforming into a singing underworld spirit by night. But in our first rehearsal director Sarah Frankcom explained that she and collaborator Maxine Peake would be reading the play as an environmentalist call to action, and responding to conversations in the media concerning capitalism and its impact on the natural world. The Skriker would be at the intersection: bringing science issues to the stage. As Peake explains: 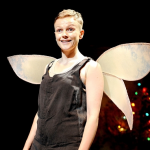 With our world in constant environmental crisis and our survival options becoming increasingly narrow, Caryl’s play to me seems like the Earth’s last cry for help. It’s a fairytale turned nightmare, a warning and a premonition to our future survival on a planet that we have mercilessly exploited and abused.

The director, Sarah Frankcom adds that ‘one of the major drivers for looking at [The Skriker] again is the world it is set in, being a bit of a premonition about a world in environmental crisis, is the world we live in now.’ 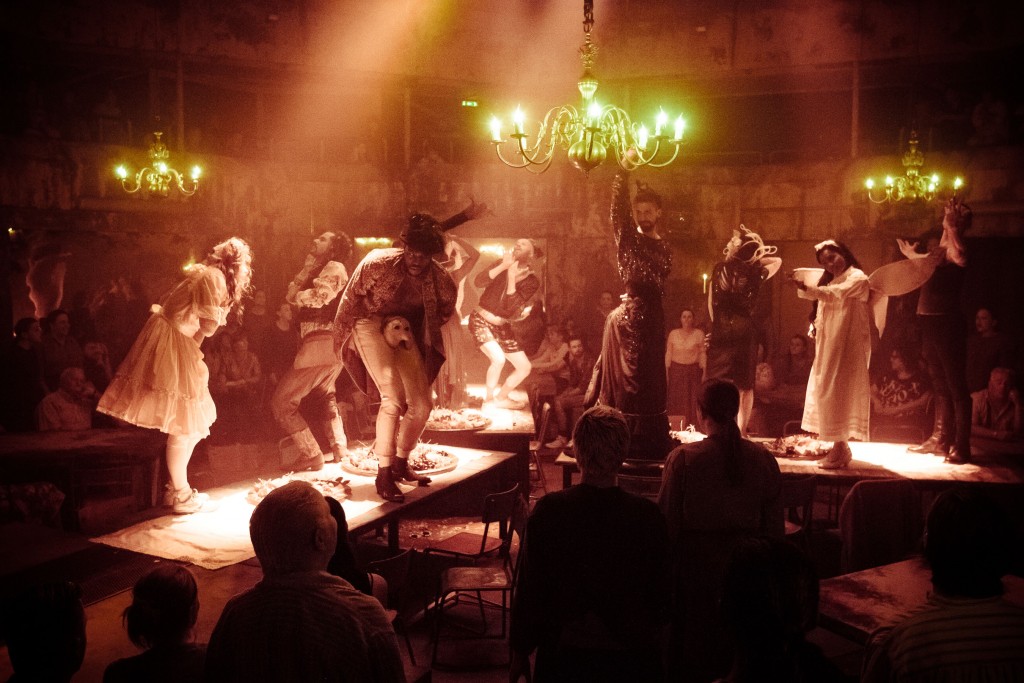 In preparation for the play the creative team and ensemble cast read Naomi Klein’s This Changes Everything: Capitalism vs the Climate; the tension between wealth, health, and nature that underpins the book also clearly influenced this adaptation. Klein’s book was used as what Peake refers to as ‘a bible piece’ that influenced the play’s creative development but also its reception, with a excerpt appearing in the production’s programme alongside bio-art stills taken from theThe Skriker trailer produced by Alice Dunseath. Klein’s climate change argument is historical, and she argues that if it had been addressed in the sixties when scientists first began to urgently raise the issue, or even in the 1980s and 1990s in the era when James E. Hansen gave his seminal Congress testimony on the crisis of global warming and the Kyoto Protocol was introduced, then perhaps climate change and global warming could have responded to without a need for economic revolution. Klein claims: 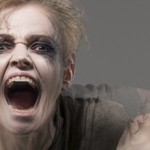 We are stuck because the actions that would give us the best chance of averting catastrophe – and would benefit the vast majority – are extremely threatening to an elite minority that has a stranglehold over our economy, our political process, and most of our major media outlets

As a physical embodiment of nature, Peake’s Skriker celebrates the inevitable end of humanity and its seemingly magical and misunderstood science and technologies. Frankcom’s interpretation of The Skriker is staged in a harsh industrial world with hazy city smog far from the ancient natural world recalled by the Skriker, where humans revered rather than poisoned the land. A cold metal and concrete set is utilised as a mental hospital, a housing estate, and a hellish underworld. Audience members sat on the stage level are part of the play forced to engage with this damaged force of nature and her menacing ensemble. The overwhelming banquet scene that takes place in the Skriker’s underworld kingdom revels in a loss of control and bodily pleasures that results in visceral self-destruction: a cannibal feast of human flesh.

This is not a natural faerie woodland fantasy but an apocalyptic reality where nature has become an actively vengeful force, an unseen menace. The play opens with a monologue where the Skriker rallies against the modern world and its destructive tendencies, and as the she cautions in a later scene, nature is fighting back:

Have you noticed the large number of meteorological phenomena lately? Earthquakes. Volcanoes. Drought. Apocalyptic meteorological phenomena. The increase of sickness. It was always possible to think, whatever your personal problem, there’s always nature. Spring will return even if it’s without me. Nobody loves me but at least it’s a sunny day. This has been a comfort to people as long as they’ve existed. But it’s not available anymore. Sorry. Nobody loves me and the sun’s going to kill me. Spring will return and nothing will grow. Some people might feel concerned about that. But it makes me feel important. I’m going to be around when the world as we know it ends. I’m going to witness unprecedented catastrophe…

…or should the audience bring the science? 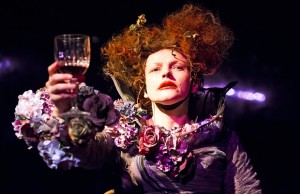 Global catastrophe is a direct consequence of humanity’s disregard for the natural world. The Skriker, like Churchill’s 2002 play A Number that used cloning as a means to engage with the nature/nurture debate, does not directly comment on the science of global warming. Unlike other recently staged and revived science-based plays like Constellations, Copenhagen, and The Effect that are structured around scientific principles and medical dilemmas, The Skriker requires the audience to ‘bring the science’. Kirsten Shepherd-Barr’s book Science on Stage: From Doctor Faustus to Copenhagen notes that audience members can fill in the scientific gaps, which allows for a focus on ethical dilemmas and catastrophic consequences. The Skriker integrates key ideas concerning environmentalism and dramatises the implications and issues for an audience who are regularly confronted by scientific stories about global warming in the media.

The Skriker is a form of science education; a starting point for discussions of the nature of global destruction. Audiences emerge from the immersive theatre in the round at the Royal Exchange Theatre more often than not confused by what they’ve seen. I’m in the play and it has taken me three weeks of performances to even begin to appreciate its complexities – we have had countless dressing room discussions to try to get to grips with this multi-themed play and its apparent environmentalist message. Peake explains that the Skriker wants the women she seduces on stage to ‘help set the world on fire’ and convince them that ‘time is running out’ for this world, but the Skriker also seduces the audience into thinking the same thing, even if they can’t really articulate their thoughts when they emerge back onto the streets of industrial Manchester.

Many thanks to Vanessa Heggie for her help with this article. Take a look at The H Word for further discussions of the untold history of science.

← Reviewing Science-based Fiction in 2015…
You gotta make way for the Homo Superior: Mutation, Evolution, and Super Powers on Screen →