Jill Trent first appeared in issue #6 of the pulp comic The Fighting Yank published by Nedor Comics. The Fighting Yank was a patriotic Second World War series launched in 1941 and was about ‘America’s Bravest Defender’ – Nedor’s pulpy equivalent to the Shield and Captain America. Jill Trent is a rather unusual character for the era; a scholarly female scientist who used her own knowledge to fight crime. She is established in this Golden Era series as an extremely well educated woman with degrees in physics, chemistry, and optics to name but a few. She uses these to develop fantastic (and scientifically questionable) inventions such as infra-red lamps and lenses (that could see through objects), infra-radiant magnifying glasses, and indestructible cloth. Jill Trent: Science Sleuth was launched as a separate comic strip appearing in The Fighting Yank and Wonder Comics from 1943-1948. 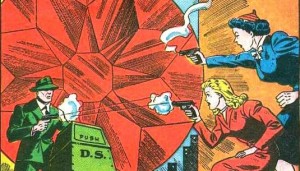 Jill Trent’s newest invention gets her into heavy trouble this time – and then gets her right out! What happens when Jill and her friend, Daisy, come up against:

“The Case of the Black Sheep Murderer!”

You can see the full comic strip here

The Golden Age of Comics is often considered to have begun with the release of Superman in 1938 – a character and franchise that continues to be popular. There was a boom in comic sales during the Second World War; comics were relatively cheap, portable, and tended to towards telling patriotic stories with pro-American characters. For example, Captain America was specifically created in a lab, within the comic’s storyworld, as the ideal All-American soldier to triumph over the country’s enemies. He was a wartime hero – a metaphorically unbeatable America. These comic book stories were reflective of the zeitgeist – responding to the need for hope and adventure in wartime America. This era of comics saw the rise of characters with secret identities, superpowers, and skin-tight star-spangled suits. Superhero characters were popular but they shared the market with other regular human crime-fighters in the detective and crime genre comics. This Golden era was short-lived but it did establish comics and graphic novels as a mainstream entertainment form with its own unique mode of communication, and artistic conventions. 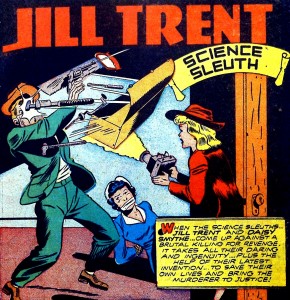 Jill Trent was one such human crime-fighter. She did not have superpowers or a skin-tight suit (although she was always fashionably attired) but she was able to apprehend criminals through her own skills and science. As a woman in wartime America Trent was shown as being restricted by her gender; she could not get a position in the areas that she wanted work, stating that she could not work as a police detective, as an FBI agent, or a PI with any of the big investigative agencies. Frustrated by these apparent gender limitations she began her own detective agency called the ‘Science Sleuths’ with her best friend and college buddy Daisy Smythe. The agency combined the natural detective skills, scientific knowledge, and complex technological inventions of Jill alongside Daisy’s advanced skills in Judo and weaponry. Both were highly skilled – but they had earned and developed those skills through hard work and determination rather than through some supernatural event or accident. Dressed in fashionable, yet demure, skirt suits these crime-fighting dames used science and their own expertise to beat the villains without the need for revealing costumes, secret identities, superpowers, or men. 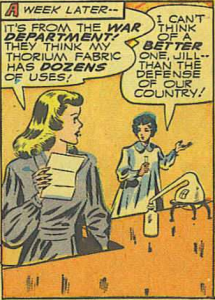 These feisty female characters promoted science and the use of science in combating crime. However, much of the ‘science’ used in the series is inaccurate or practically impossible – e.g. using infrared to combat ultraviolent poisons. Science is, more accurately, used as a hook to attract and maintain a readership. Jill Trent: Science Sleuth draws upon interest in wartime technologies and the emerging idea of crime-scene investigation and collecting and analysing evidence rather than just relying on traditional detective work. Jill Trent: Science Sleuth at points verges on science fiction as she uses her improbable inventions and gadgetry, it goes beyond speculative science and more towards fantasy. But the notion of science as a crime-fighting tool was still a relatively unique concept in 1940s America. Other characters of the golden era of comics such as Chester Gould’s Dick Tracy were ahead of their time by using science (or an imagined version of it) to solve crimes. Dick Tracy featured advanced gadgetry such as his two-way wrist radio that aided in his ability to successfully apprehend and convict criminals. 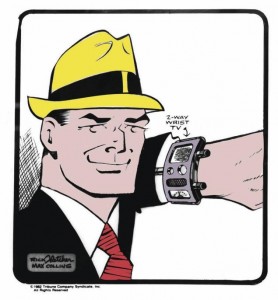 The Dick Tracy comics voiced Chester Gould’s concerns about gangster violence of early thirties Chicago and the need to look beyond traditional detective practices towards science. Gould attended workshops and training sessions run for the Chicago police department on the development and introduction of forensic theory and practice that inspired (rather than informed) Dick Tracy’s approach to fighting crime. Like Jill Trent, Dick Tracy tended to stray towards the science fiction and more fantastical narrative arcs in contrast to novels in the detective fiction genre (dating back to the Victorian era) that featured characters who used specialised knowledge, technology, and scientific methods to reach their conclusions. The comics did not focus upon gory crime scenes and solving the crime through dissection of the evidence but rather pseudo-scientific means of catching the bad guys in exciting and seemingly imaginative ways.

Despite their inaccurate science, these golden era comics do constitute a form of science communication. They are interesting because of the way in which they incorporate science into their stories. Science is a hook, but al 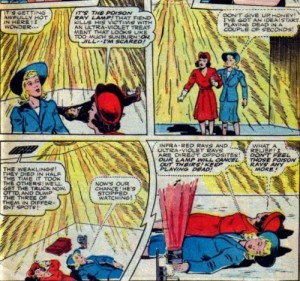 so an important narrative element – it is through the use of scientific methods and technological creations that the heroes are able to apprehend the criminals. Entertainment media does not need to be about ‘accurate science’ in order to qualify as science communication. Comics like Jill Trent and Dick Tracy clearly communicate a sense of what people believed science might be able to achieve, and they also represent an idealised conception of what science is for a non-specialist audience. These comics are communicating about science even if the inventions they feature are essentially fantastical. 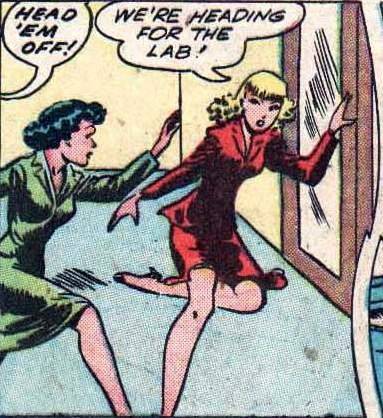 More broadly the comic book form is now being studied as a serious form of science communication. As a medium, comics can convey concepts in both written and visual forms simultaneously – they combine visual representation (e.g. showing scientific ideas and principals) with additional text (e.g. scientific explanation). But instead of having the image and text as separate components with pictures simply illustrating the text, comic books more clearly combine the two – they communicate their message simultaneously. In comics the text does not simply comment upon the image it is part of it. As a form of science communication comics can ground science in familiar social contexts. For example, Clan Apis, is a graphic novel biography of a honey bee called Nyuki. Written and drawn by biologist Jay Hosler, Clan Apis depicts the life of bees and their complex insect heirarchy. By presenting science through a narrative medium that features a plot and a range of characters (fictional or non-fictional) readers can understand and unpack scientific procedures and concepts through lived experiences. Comics have the potential to promote and improve scientific literacy for both adult and child readers.

For further reading have a look at:

← The Twelve Days of Science Entertainment
Evangelizing the Cosmos: Science Documentaries and the Dangers of Wonder Overload →