Have you ever heard of the “Page 99 Test” as a way of determining the value of a book before you read it? The test is based on a quote by Ford Maddox Ford who believed that a reader could use the contents found on page 99 to quickly assess the merits of a book. According to Maddox Ford, “open the book to page ninety-nine and read, and the quality of the whole will be revealed to you.” When Lab Coats in Hollywood came out Marshal Zeringue, who runs the Page 99 Test website, asked me to apply the test to my book. The results of the “experiment” were interesting, so I thought it would be a good idea to re-post my analysis of page 99 and discuss how it represents the overall content of the book here on our blog: 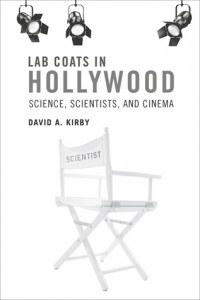 My book covers the back stage role that scientists play in the production of popular films. Scientific expertise can help filmmakers create plausible and visually interesting films. Science consultants become involved in numerous areas of film production including script checking, working with actors, set design, story advice, special effects, on set consultations, and sound design. Yet, scientists’ advice is only useful if it allows filmmakers to better utilize their own creative filmmaking expertise.

I was surprised to find how well page 99 conveys two of the book’s central messages. I recount a story concerning the depiction of the alien radio signal in the film Contact (1997). First, this story confirms how scientific certainty actually enhances creativity when filmmakers are faced with too many options:

The alien radio signal was particularly problematic for Contact’s filmmakers. Being an alien signal they had no basis for determining the transmission’s structure. As discussed in chapter 4, computer and video supervisor Ian Kelly hired Tom Kuiper and Linda Wald to develop the computer displays and audio for the radio signal. While an alien radio signal might sound fantastical, the science is actually mundane. Rather than facing infinite possibilities there is only a single option based on mathematics as long as the aliens live in the same universe as us. According to Kuiper it was fairly easy to determine the signal’s form, strength, and audio, because “It’s radio engineering of a pretty straightforward kind. It’s what radio astronomers do all the time.” Kuiper and Wald knew the precise distance from the Vega star system to Earth and that the signal would be a string of prime numbers housing an embedded television signal. So, to determine the radio signal’s characteristics they plugged the numbers into well-established equations.

Second, this story reveals some of the criteria filmmakers use for determining whether it is beneficial for their film to maintain scientific accuracy by exploring why filmmakers will adamantly adhere to one scientific fact, while quickly dismissing another. The film’s sound editor was not happy to learn that the signal would consist of a pure tone repeated as a prime number sequence (2, 3, 5, 7, 11, etc). The discovery of the alien radio signal is a powerful scene that is crucial to establishing the film’s atmosphere. His professional judgement was that a pure tone was not cinematically interesting enough to convey the combination of exhilaration and dread that the scene required. Likewise, he felt that the scene’s drama would be heightened if they could start the signal’s sequence off with a single ominous sound. One is not a prime number so an accurate sequence would start with two sounds.

When you watch the film you hear that the sound editor decided to maintain accuracy for only one of these facts –the prime number sequence. Why this fact and not the other? I find that filmmakers take into account the public’s familiarity with a scientific fact when making production decisions. Facts that are likely to be known by a majority of the public, like prime numbers, fall into the category I call “public science.” Facts that are relatively unknown outside an expert community I designate as “expert science.” Filmmakers are more likely to modify facts that they perceive as expert science. The fact that the radio signal would be a pure tone, for example, is unlikely to be known to anyone other than radio astronomers.