Monsters, Microbiology and Mathematics, Oh My!

Of late, the undead and science have become rather familiar (if not unusual) bedfellows, with a host of monsters providing the foundation for some rather quirky public engagement. The Monsters, Microbiology and Mathematics Team – MoMiMa for short – based at Manchester Metropolitan University, have their fair share of experience wrestling werewolves, vilifying vampires and zombie … zombie … well, z is an even more difficult letter than v at the best of times. (Trust me, I know!) This rather bizarre (and potentially distasteful) marriage has given rise to a jolly good time for all involved, some really curious ideas and, thankfully, some excellent science communication, and we are just dying to share them with you – no pun intended. 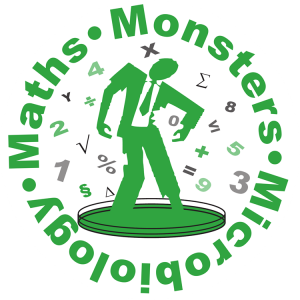 I suppose, first of all, I should explain exactly what our monsters have to do with microbiology and, indeed, mathematics, because to the untrained eye, it might seem like ‘not a lot’. Rather, it might seem like a good excuse to watch many very good (and often very terrible) films and call it research. All right, it is a little bit this, but there’s definitely a serious side too. Consider your standard zombie. That might sound simple enough, but I’ve found that people are very (very, very) passionate about their own concept of a ‘standard zombie’. While it can be tricky to define the standard version of something that doesn’t exist, there are a few salient facts that are usually agreed upon quite quickly in any raging zombie debate:

1. ‘Zombieism’ is contagious. The precise details are debateable (is it a bite? A scratch? How destroyed does a body need to be before it doesn’t become a zombie? Are the zombies specifically trying to create more zombies? A debate for another time, alas) but, in essence, being attacked by a zombie has the potential to turn a non-zombie into one of the undead.

2. ‘Zombieism’ is incurable. Well, sort of. Again, the precise details are debateable, but largely, if you’re faced with a zombie, it’s a case of take the head off (or destroy the brains, naturally) to incapacitate the opposing undead – not quite a cure, but certainly a way of stopping them.

3. ‘Zombieism’ requires a response strategy. The most debate usually happens here – which ones are good, which ones are bad… People tend to be very opinionated on this, usually based on which films/books/games they are most familiar with,) but they always want some kind of strategy, even if it’s just to hide and/or go to the pub (I’m looking at you, Shaun).

With that in mind, let’s instead consider influenza. Influenza is, as most people are aware, contagious, spread by droplet transmission – watch your coughs and sneezes! Unlike zombieism, influenza usually goes away after a short period of illness so, generally speaking, doesn’t require an individual’s head to be removed or brains to be destroyed as a means of stopping the infection. And a response strategy? Well, every year, we vaccinate those more vulnerable to severe complications (the elderly, the immunocomprised, etc.) in an attempt to minimise the severity of flu outbreaks. It’s not spread by biting and scratches, but you might see that the flu has quite a lot in common with our ‘standard’ zombies. In fact, when you think about it, zombieism is just like a disease. It’s even presented this way in films. In ‘I Am Legend’ for example, the Krippin Virus is responsible for the zombie-like monsters. It’s just a rather unique disease with some zombie-like qualities.

Well, as it happens, lots of the rules of dealing with monsters also apply to diseases – in fact, a computer simulation of a monster outbreak looks remarkably similar to that of a disease outbreak (which is where the mathematics come in). You even find yourself asking a lot of the same questions about modelling a monster outbreak and a disease outbreak, although admittedly, the terminology can be different. Consider: When you get bitten by a zombie, how likely is it that you turn into one? When you are exposed to a disease, how likely is it that you become infected? These are clearly the same question! While it can be difficult to get people to come up with answers to the latter (as they tend to worry about getting the wrong answer), the former is much easier, since we’ve found that nearly everyone has some experience of zombies/vampires/werewolves, and there is no right or wrong answer.

In terms of getting people involved, what sort of things have we done? One of our favourite activities is to let people design their own monster outbreak. Games like Plague Inc. bring out the best (worst?) in a player’s dark side, and you’d be surprised, or perhaps not, at how keen people are to wipe out a ‘simulated’ population. Presented with an Activity Mat, which guides participants through a series of questions, a simulation can be constructed which reflects the knowledge and experiences of a group.

While the simulations are always unique, we find that people tend to overestimate their zombie-killing abilities, designing zombies far too feeble for world domination. In the long run, this leads to less apocalypses than we might like (not a sentence I get to say that often).

Having designed their own outbreak, it opens up discussion for appropriate response strategies (why is quarantine better than hiding from the zombies?) and how the questions answered relate to real diseases. Then, as if by magic (or science!), you can gently point out the similarities between monsters and diseases, and the transferability of knowledge between the two. 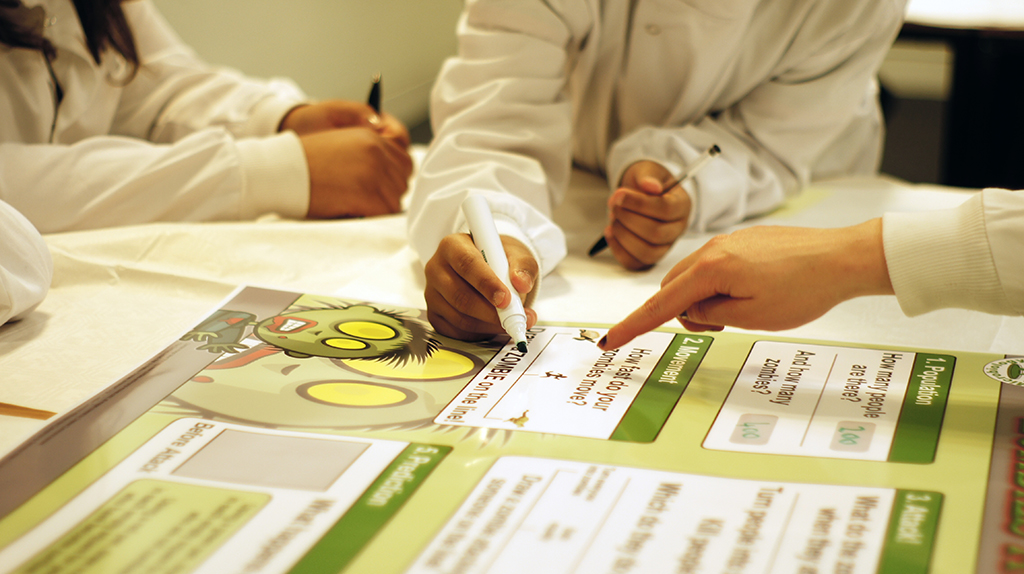 We’ve only begun to explore the value of using monsters in public engagement, and there are many other enthusiasts out there working with the same ideas. We can’t wait to see what happens, and what new ways monsters might interact with the sciences. But what’s next for MoMiMa? With thanks to the Society for Applied Microbiology, we are currently in the late stages of preparing a teaching resource (‘Simfection’) which uses the same idea of interacting with computer simulations, but moves away from the monster side, and focuses on real diseases. We have incorporated four case studies – measles, mumps, influenza (avian flu and swine flu specifically) and smallpox – that fit in with the A-level curriculum. Each one has simulations that can be ‘tweaked’, letting you learn more about each of the diseases. For example, the measles activity asks a player to experiment with the level of immunisation in the population, with the aim of determining the minimum coverage necessary for the ‘herd immunity’ effect to occur, i.e. where coverage is high enough to protect those who are not immunised. 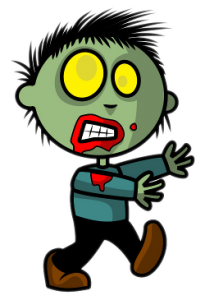 To round the activities off, there is a team-based quiz, where a team representing the population goes head-to-head with a team representing an infection for total dominance. Answering an infectious disease question correctly allows that team a brief moment of control over the simulation, to try and either save the population or destroy it, all in the name of bonus points. Our trials so far have shown that the quiz in particular is hugely popular, with teams fighting over who get the opportunity to be on the side of the disease.

It seems that zombies may be perfect at both devouring and stimulating brains! 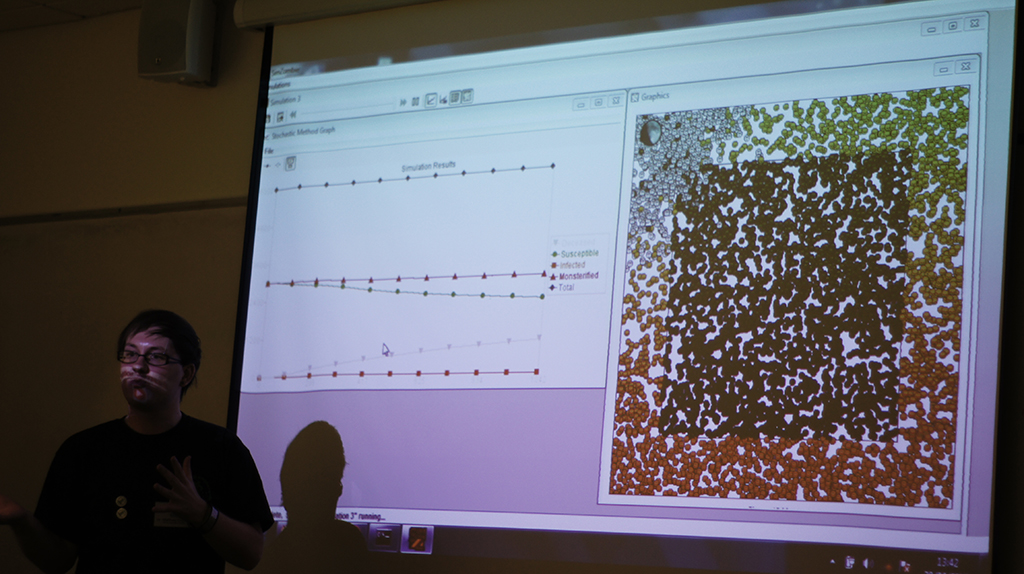 Guest blogger Matthew Crossley (@MattyCrossley) is a Programme Support Tutor in MMU’s School of Computing, Mathematics and Digital Technology, and researches the analysis of nature-inspired algorithms used for optimisation.  He also dabbles in modelling and simulation, and is the developer of SimZombie, a program that simulates zombie outbreaks. SimZombie is one of his main contributions to MMU’s Monsters, Microbiology and Mathematics Team, of which he is a founding member.  The MoMiMa Team (@MMUMoMiMa) specialise in delivering public engagement events focusing on infectious diseases and computer simulation using monsters (such as zombies!)  Previous events have included interactive workshops, monster science pub quizzes, and they have even taken part in an immersive theatre event in Edinburgh – Deadinburgh!  The Team have been running events since 2011, and have organised events as part of the Manchester Science Festival, the Manchester Children’s Book Festival, the Cheltenham Science Festival and National Science and Engineering Week.  More information about some of the team’s previous, and upcoming, events, and other work from MMU Engage can be found at the MMU Engage website, plus a case study describing the development of the workshops can be found in the Journal of Biological Education.

← Mad Evolutionists and Missing Links: Evolution in Cinema
Welcome back to humanity. Now you get to die: Vampires and… Science →