This post contains very *minor spoilers* for the Netflix series Daredevil up to episode 6 ‘World on Fire’.

Netflix recently released its most recent original series, an adaptation of Marvel’s Daredevil. It joins Marvel’s Agents of S.H.I.E.L.D and Agent Carter’s focus upon the more human characters of the Marvel Universe. Agent Phil Coulson, Agent Peggy Carter, and Daredevil/Matt Murdock are all human and definitely distinct from the god, the genetically enhanced super-soldier, the angry green scientist, and even the genius (billionaire playboy philanthropist) and his super-suit of armour. Unlike Agents of Agents of S.H.I.E.L.D and Agent Carter that were produced for weekly broadcast on television, the newest addition to the Marvel franchise has been released in a 13-episode load. This gives the audience the option to binge-watch the entire series, space it over a few days, or (if you have the willpower) over a few weeks. I have taken a break from my viewing marathon to think about a few things that came up during the first half of the series relating to the way the series communicates Murdock’s blindness and how this sensory deprivation makes him a super (human) hero. 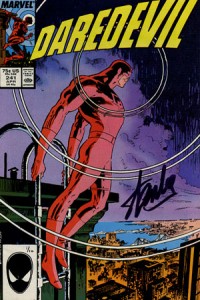 Daredevil is set in the Manhattan neighbourhood of Hell’s Kitchen in the aftermath of the ‘Battle of New York’ where the Avengers defeated Loki and his Chitauri Army. Daredevil opens on Matt Murdock (yet to be referred to as ‘Daredevil’) in confession asking for forgiveness for sins yet to be committed. His conflicted Catholicism became an important component in the comics across its history and it is incorporated into the show’s opening sequence, and the titles that feature a Celtic cross and a weeping angel (see here for a more detailed discussion of Daredevil’s Catholicism). But it is unclear whether it will be a strength or a weakness. Murdock was blinded in a childhood accident with radioactive toxic waste – this allows his other senses to develop to the point where he can smell (and assess the quality of) a guy’s cologne through walls and down three floors, and more impressively dodge bullets. It is not clear in the opening episodes how his senses are super – but it is suggested that the visual deprivation has led to the development of his other senses.

There are very few blind characters on mainstream film and television. When any under-represented group is given a major role, or in the case of Daredevil the titular role, the way that they are depicted is often heavily scrutinised (take a look at my post on screening women scientists). Representations of minority groups are, often unfortunately, unusual and therefore catch the attention of both supporters and detractors. Daredevil is one of the few representations of blindness available to a mainstream audience at the moment and on the surface it suggests that a blind person needs to be a superhero to be self-sufficient. Brent Hopkins, communications specialist for the American Foundation for the Blind has commented on the character Daredevil and highlights that ‘to live with a disability, you don’t have to be a superhero.’ Matt Murdock may be a visually impaired comic book superhero but Stan Lee, Bill Everett, and Jack Kirby were not advocates for the blind and were not intended to create a accurate portrayal. Daredevil was part of a series of 1960s comic book character that dealt with human obstacles, including disabilities e,g, Prof. Charles Xavier (X-Men), Tony Stark (Iron Man), Dr Niles Caulder/The Chief (Doom Patrol). But regardless of their intentions, by creating a blind hero they do present the visually impaired to a wider community who are not necessarily informed about the day-to-day experiences of being blind. But Netflix’s adaptation of Daredevil does get some things right about blindness and science of heightened senses that New York Magazine’s blog ‘Science of Us’ discusses here.

The ‘science!’ of Daredevil as detailed in the comics suggests that the radioactive waste gave Murdock super-senses and that there were anatomical changes to his body and brain. Despite what countless superhero stories have told us, radiation is not going to turn anyone into a superhero. The effect of ionising radiation would not be positive: exposure to radiation is likely to end in death or mutation (in a bad way, not a awesome X-Men way). Yet in Daredevil, having taken away one of Murdock’s senses (sight), the accident heightened his others, his hearing works like sonar, and he uses echolocation to sense his surroundings like radar. Although Murdock has incredibly advanced gymnastics skills his ability to evade the punches and bullets of mobsters relies upon his enhanced senses. There are real-world, non-comic-book cases where visually impaired people can use echolocation to help them get around. The part of the brain usually reserved for visual processing is instead used to interpret sounds. Daniel Kish (aka the ‘Remarkable Batman’), the president of World Access for the Blind, heightened his senses by developing the ability to use tongue clicks as echolocation. Kish explains that the clicks are ‘flashes of sound’ that reflect off surfaces and return back to him to create images in his visual cortex from the patterns of information. By experiencing the world through ‘flash sonar’ Kish surmises that: ‘I do not use my eyes, I use my brain’.

This ‘flash sonar’ is represented on Daredevil when the nurse, and only character to know masked vigilante’s true identity, Claire Temple (Rosario Dawson) asks Murdock to explain to her how he is able to ‘see so much’. The series has spent little time exploring the specifics of the Daredevil’s sensory enhancements and it is not until episode six (World on Fire) that he shares his experience of the world with Claire. Murdock synthesises a three-dimensional equivalent to human sight that appears as flames. Claire is shown from Murdock’s perspective – she looks like a fiery siren, a flickering and glowing impressionistic image. It is both beautiful and frightening to experience everything as a world on fire. As Oliver Sava notes in his A.V. Club review of the episode: ‘As heavy-handed as it is, I love the idea that a character by the name of Daredevil would see a world consumed in flames, and it’s a smart angle for his radar sense that plays into the major themes of this series.’ I want to find out if there were science consultants involved in constructing his point-of-view shot of Claire, and if they plan to use this interesting impressionistic imagery in a potential second season. 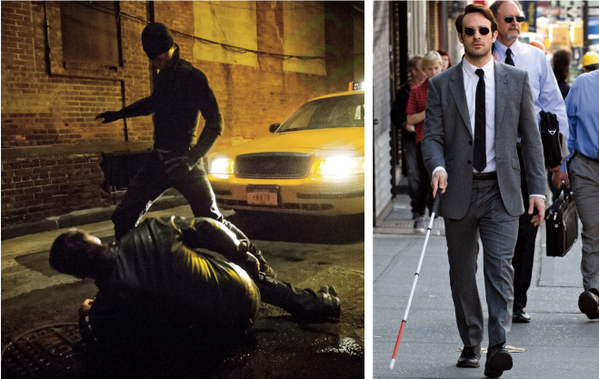 Daredevil, whether intentionally or not questions a reliance upon the visual. By trying to represent the experiences of a blind hero, media producers face some interesting challenges. The first challenge is to convey the experiences of sightlessness using a medium that relies predominantly on the visual. Daredevil need to effectively show a predominately sighted audience how a blind character experiences the world – they have to show how Murdock navigates his way around Hell’s Kitchen. Moving image media – including television, cinema, and video games – are multi-sensory and do not simply rely upon the visual as a mode of storytelling. The producers of Daredevil had to produce a non-visual experience by developing a visual tone and texture that communicates Murdock’s enhanced allocentric sense (the awareness of one’s body relative to its environment). The only shot of Murdock’s point-of-view appears in episode 6 – but the rest of the series needs to show the action, the well-choreographed fight scenes are amazing, whilst also communicating how Murdock is able to take out multiple assailants without suffering serious bodily harm.

Daredevil is a superhero narrative that is constructed around detailed images of sensory perception. Blindness offers the producers of the show the opportunity to explore the limitations and possibilities of its visual and audible technologies. The clip above shows a fight from episode 3. Fight scenes are accompanied by a minimal non-diegetic music soundtrack, which allows for the diegetic fight sounds (breaking glass, crashes, bangs) to be clearly heard. The example sequence is set at night, and it is not easily visible – but the layered and enhanced soundtrack allows the audience to follow the action easily. The punches and roundhouse kicks are enhanced with a ‘whoosing’ sounds, and as the assassin John Healy (Alex Morf) reaches for a pipe we can hear the metal scrape across the asphalt. The sound is louder and slower matched by slow motion cinematography to draw audience attention not only to the weapon but also to its sound. The fight is also quite tightly framed keeping the audience’s attention on and pulling the fight into Murdock’s personal space – the space he can smell, feel, hear, and thus control.

Daredevil‘s enhanced senses do not just make him a great fighter, they also give him the ability to read emotions. He can use his super-human senses like a lie detector by listening to heartbeats, smelling sweat and tears, and feeling changes in body temperature. He listens to the heartbeats of those he questions and cares for – he can read emotions by analysing how people physically respond. In a sequence in the second episode he uses this skill to question his hostage and evaluate his answers for degrees of truthfulness. This is communicated through sounds of heartbeats as the other diegetic sounds are muffled or quietened. Claire acts as a conduit for the audience as she questions his abilities and how he is able to read (and smell) the bad guy so well. All of these senses allow Murdock to identify people by their specific patterns: their heartbeat, their smell, and his sonar/radar to be able to see at least fiery images of people. I will be interested to see how the rest of the series pans out, and if they continue to develop the visual/aural tone produced to communicate the Daredevil’s abilities and experience.

Ironically, Daredevil – a series about a blind character –  has been inaccessible to a blind audience. Although the series is being produced for a audio-visual medium But it was announced last week that Netflix will be releasing an audio-description option for the series and increasing numbers of the streaming service’s flagship shows. Audio-description (video description/visual description) is an additional narrative sound track that is intended for blind or partially sighted consumers of film and television (visual media). It explains what is happening onscreen in between the dialogue sequences. It turns a tv show, or film into what might be best described as a radio play – rather like the 1940s Captain America radio plays that appear in Agent Carter (only better). Ironically Daredevil, as a show with a blind hero, was until very recently lacking this feature and it’s great that Netflix have responded to the complaints of a potential audience. This improvement makes the show accessible to wider range of people including the visually impaired that Matt Murdock in some senses represents.

← Creativity and Collaboration across the Arts/Science Divide
The Nineteenth Century CSI Effect: Exploring the Roots of Forensic Fictions in Detective Stories →

2 comments for “‘You’re Blind, But You See So Much’: Netflix’s Daredevil and Blindness”