Editor’s note: Our Playing God film series got off to a successful start on 5 March with the showing of Bride of Frankenstein. The goal of the film series is to use film as a way to challenge audiences to consider the nature of and connections between science and religion. Often the relationship between science and religion is painted as a conflict, but we understand it in the large to be more of a dialogue. In our opinion it is always a good idea when we can bring the two worlds together for a discussion. In that spirit we were delighted that the Bishop of Manchester, the Right Reverend Dr David Walker, was willing to open the series by discussing his thoughts on the science/religion interface. His words were a very thoughtful meditation on this topic so we thought it would be a great idea to share them on our blog.

Thirty five years ago I was working in the same department as Stephen Hawking. I knew my time was soon likely to be up because I’d already applied to train as a Church of England priest. When I left to do so, in the summer of 1980, I was one of two people making the same switch from Science to Religion. The other was of rather more exalted status than a simple post graduate researcher, he was the Professor of Particle Physics. Science and Religion have never appeared to me to be alternative world views, even less have I seen them as opponents in some battle for human allegiance. The scientific method of rigorous enquiry played a part in leading me to Christian Faith, and it still underpins the research methods I used in the doctorate I received last year from the University of Warwick. I’m privileged to be the bishop with oversight of the Society of Ordained Scientists – a group that refreshingly does exactly what it says on the tin. It brings together, from East European Pentecostals, to American Jesuits at the Vatican Observatory, men and women who share the dual qualification of scientist and faith leader. And along with that, I like film; especially mainstream films that explore scientific and religious themes. So it’s good to be here “Playing God” with you.

The opposite of faith is not doubt. The opposite of faith is certainty. For both the scientist and the theologian there is a journey of testing hypotheses, seeking to be found wrong, and then living within the framework of the best current guess, even while the exploration continues. Neither sits dispassionately aloof, both are fully engaged participant observers. Unchallengeable fundamentalist beliefs, be they founded in a version of religion or of scientific theory, are the common enemy of us all. 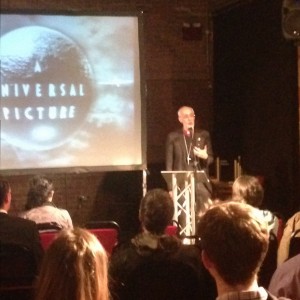 In the summer of 2013 I was taking part in a conference of scientists and theologians based around the Physics Department at Durham University. One evening we got talking about how our various disciplines are portrayed in popular media. The theologians complained about religion being most often depicted by its extremes: scary men behaving immorally in the name of an ostensible religious cause. Then the scientists took their turn, telling of how whilst maybe in the 1960s their image was of the people who would save the world, more often now they are shown as the ones whose extreme creations will destroy it. The man in a white coat (and it was originally always a man) is no longer a figure of hope but of foreboding. Maybe we are back at a world more familiar to Hammer Horror films than to Harold Wilson’s salvific “White Heat of technology”, Doctor Frankenstein will see you now.

Fundamentalism, be it scientific or religious, is however not our greatest enemy, for that we need to look across to its subtler sibling, reductionism. Reductionism is the belief that this, whatever this may be, explains everything. Fundamentalism is a form of reductionism, but does not exhaust the latter’s murky depths. The religious reductionist believes that his bible or her set of dogmatic precepts or our shared cultural patterns provide all that is necessary. The scientific reductionist believes the same of his or her particular field or discipline. Maybe it’s now Doctor Strangelove’s moment in the surgery.

For we are, all of us, most prone to hubris when we are at our most successful. In the early part of the twentieth century, when advances in theoretical physics were happening at great pace, the primary form of scientific reductionism was found among those who believed that everything could be, at least in theory, explained, if only we knew all there is to know about the properties of the basic subatomic construction blocks of the universe. My dad, a Manchester Mechanical engineer, built a house for us in the late 1950s around the belief that nuclear power would soon make electricity so cheap they wouldn’t be bothered to charge for it. I would argue that it is no coincidence that advances in more recent times in biological sciences have sometimes been accompanied by a similar reductionist philosophy, one in which biology explains everything, not only at its own scale but at every larger scale as well. This is truly to “play God”. Against this I would argue that good science and good theology always recognise that the new thing will break in, unexpected, inexplicable. Try as you might Allegri’s Miserere cannot be captured by the analysis of wave patterns, no more can Salvador Dali’s Christ of St John of the Cross be reduced to the properties of paint. No matter how overarching the theory may appear, there remains something of a far greater order of magnitude beyond it, which it cannot explain or control. As a Christian I would call that ultimate, God.

Film and theatre in particular, with the ability to explore a concept in vision, sound and for a couple of hours at a time, have long provided a strong counter narrative to reductionism. Characters are allowed to take their behaviours and beliefs to their logical conclusion, and in doing so they reveal the flaws that will lead to their downfall, as they have since the days of Greek tragedy. 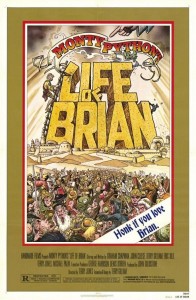 Modern theories of governance draw a helpful distinction between the role of the executive and non-executive. The former is responsible for proposing direction, the latter for subjecting such proposals to friendly but robust scrutiny and challenge. I’d like to suggest that the role of the media, especially film, with regard to both religion and science, falls into that non-executive category. I’ve actually very little time for films that seek to propound a religious cause, even if that cause lies close to my own heart. I’ve never had any desire to watch Gibson’s Passion of the Christ but I remain an avid fan of Monty Python’s Life of Brian (interesting 1979 debate over Life of Brian and claims that it was blasphemous). Film draws out the potential consequences of our beliefs and hypotheses within a bounded and safe zone. We may watch empires collide and whole worlds be destroyed, but there will still be popcorn and coke in the lobby when we rise from our comfortable seats.

Allowing art, and film in particular, to make me question myself has never, and I’ve been at it for most of a lifetime, undermined my faith. Rather I have come out of the experience with a deeper level of both understanding and belief. And better fitted to engage with the rich plurality that Manchester has epitomised for the last two hundred years. So enjoy this series of films. Let each of them set up and knock down its own constructions. But please allow the series as a whole to provide that scrutiny and challenge to your own self that will allow you to grow beyond your present understanding into something greater. The task is not to play God but to be continuously formed and reformed more closely into his likeness.