‘Talking Apes with Big-Ass Spears’: Violence, Science, and Dawn of the Planet of the Apes

By 2011 I had already spent five years of postgraduate study researching the history and cultural interpretations of Planet of the Apes. I was very nervous about seeing Rise of the Planet of the Apes; it was released just a few weeks before I submitted my PhD and I knew I would have to make at least some reference to the film in my thesis. So, I anxiously went to the screening accompanied by my low expectations and a notebook. I was, thankfully, very pleased with the new origin story that was clearly intended as a new beginning for the multiple-decade spanning franchise. It did not try to awkwardly update or rehash the original series’ subtext (oh, Tim Burton) but instead used the science fiction genre and the possibilities of the fall of humanity to explore more pertinent socio-cultural issues. It almost managed to wipe 2001’s Planet of the Apes from my memory (sorry, Tim). Almost.

Dawn of the Planet of the Apes is set ‘ten winters’ (approx. 2021) since the end of 2011’s Rise of the Planet of the Apes. Human civilisation has been almost entirely wiped out following an outbreak of an extremely contagious virus called ‘simian flu’ – blamed upon apes, despite its human-made origin – that killed the majority of the human race and gave rise to the apes increased intelligence. In Rise of the Planet of the Apes, Caesar (a spectacular performance-captured Andy Serkis, who returns to the role in the sequel) successfully leads an insurrection against his human captors. Ten years later in Dawn of the Planet of the Apes he is the enigmatic leader of a colony of peaceful apes out amongst the redwoods. Near the opening of the film the apes come face-to-face with a small group of humans searching for a defunct hydro-electric dam near the ape citadel. Following this first encounter, one trigger-happy human describes the forest’s inhabitants as ‘talking apes with big-ass spears’ and another comments that apes possess evolutionary advantages for surviving without housing or power. Despite these apparent ape advantages in this new world the humans are armed; semi-automatic weapons give them a frightening and threatening upper-hand. The film’s main human character, Malcolm (Jason Clarke), attempts to peacefully enter ape territory, maintain a ceasefire, and fix the dam to generate power (an extremely rare commodity in the film’s post-apocalyptic reality), whilst hopefully quelling the survivalist tendencies of the film’s human antagonist, Dreyfus (Gary Oldman). But humans are shown to be violent and fearful and they fire the first shots that ultimately incite a war (battle) between the surviving humans (immune to the mutated virus) and the apes that benefitted from the same bioscience blunder.

You know the scary thing about them? They don’t need power, lights, heat. Nothing. That’s their advantage. That’s what makes them stronger.

Foster (Jon Eyez), Dawn of the Planet of the Apes 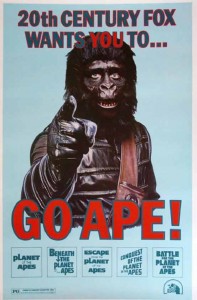 Despite the softer commentary on the importance of family, Dawn of the Planet of the Apes is a Hollywood summer blockbuster with jaw-dropping special effects, epic battle scenes, and an unrelentingly violent video-game aesthetic. This is Planet of the Apes for the Call of Duty generation; rounds of ammunition are fired directly into the camera to produce a visceral and an extreme, seemingly first-person experience of the battle between humans and apes. The violence in Dawn of the Planet of the Apes is at points overwhelming and several people walked out of the midnight screening that I went to. The first-person shooter style of cinematography can be partly attributed to the enormous vfx team who will have also worked in the game industry but also to the sectors of the audience for whom this style of visual storytelling is far more familiar, accepted, and expected.

In the original reviews for the 1968 Planet of the Apes film critics were concerned with the film’s violent content and the images of apes, on horses, brandishing semi-automatic rifles. There are still apes on horseback with rifles but this is 2014, and the apes now get access to an entire arsenal of military-grade weapons. Once Koba (Toby Kebbel with added CGI), Caesar’s seemingly sadistic second in command, discovers that the humans have stockpiled weapons the film takes a brutal turn. Damaged by his experiences as an abused lab ape at the hands of human scientists, Koba is overly eager to exact revenge upon the species that harmed him. Caesar’s primate army swaps out their ‘big ass spears’ for machine guns and rifles of several varieties. Koba is seen dual-wielding machine guns as he charges on the humans; it is a striking image that recalls the unyielding gunfire of 80s action movies starring Jean Claude Van Damme or Sylvester Stalone. The bloody battlefield of the second half of the film is lit up by fire and gunfire, a petrifying image of unrestricted gun access and the way a situation can escalate given the addition of advanced weaponry. In light of recent gun crime tragedies, that seem sadly almost commonplace in the US now, the image of stockpiled weapons and reliance upon them to defend and control is disturbingly resonant.

Science as a theme and activity was central to Rise of the Planet of the Apes; clinical images of the lab and the actions of bench scientists and their role within a corporate science research institution. The film was framed by the actions, decisions, and consequences of scientists, and in a similar fashion to 2007’s I Am Legend the fall of humanity is the fault of a scientist with good intentions. In both Rise of the Planet of the Apes and I Am Legend the apocalypse follows an attempt to cure a disease – Alzheimer’s disease and cancer respectively. In both cases it is not the result of a single mad scientist, as the primary scientists in both films have good intentions, but rather ‘science’ is described collectively as the problem. In Dawn of the Planet of the Apes there are references to the mishandling and misunderstanding of science, and the only direct reference to science and institutionalised science comes in the form of a female doctor (Ellie, Keri Russell) who once worked for the Centre for Disease Control and her battered CDC vehicle. In Dawn of the Planet of the Apes the labs and the city that surrounded them have long since fallen away. Graffitied buildings and overgrown San Francisco streets are shown as remnants of the human world that once existed. San Francisco, once a vibrant city, becomes a haunting background for the struggle between apes and human, between nature and technology.

Dawn of the Planet of the Apes is a gratifying sequel to Rise of the Planet of the Apes, and it is a valuable addition to film history’s bleakest and longest running film franchise. It presents a disquieting image of a post-human future where humanity’s reliance upon electricity, and power more generally, is shown to be unstable, dangerous, and their primary weakness. The film lacks many of the nuances of the previous instalment and offers an exploration of the consequences rather than the processes/systems of science. I might be inclined to argue that ‘real’ science has been exchanged for unreal violence. But what it does do well is showcase and celebrate Weta Digital’s spectacular CGI effects and the undisputable talents of the performance-capture artists. The filmmakers use this technology to convincingly tell the story from the apes’ perspective, the introduction to their world is beautiful and the audience is drawn in, empathising with them in their attempts to retain their forest habitat and peaceful way of life. They are, unfortunately, pitted against weakly presented human characters; I can barely remember the names or personalities of these characters who cannot and do not offer a balance to the complex ape characters.

Sadly there is poor female representation in both ape and human camps – they are represented as child bearers and care takers – Ellie is only revealed as a CDC scientist and doctor when she is able to help Cornelia (Judy Greer), mother to Caesar’s children, with her post-natal complications. Her medical intervention diffuses male aggressiveness and reinforces lazy stereotypes that mark males as dangerous, inherently violent creatures, and females as their caring, non-violent mates.

Despite its numerous shortcomings, this blockbuster is entertaining and does not underestimate the audience proving that relatively complex science-based narratives do have a place alongside warring intergalactic robots and action-packed racoon-led space adventures. Even when the complexities of narrative are passed over for gunshot spectacle, Dawn of the Planet of the Apes still poses socially relevant questions and explores the issues of advances in technology and science and how these are regulated and researched. I look forward to seeing the next instalment and continuing to explore this darkly dystopian storyworld. The future doesn’t look bright for humankind but it does for a scholar who continues to be fascinated by the original science fiction franchise.

(if they have a gun)

← Fear of a Radioactive Planet: Genetic Anxieties and Atomic Cinema in the 1950s
Deliquescent Acuity: Luminosity, ‘Architectural Sharpness’, and the Decayed Hyperrealism of Dreams →

4 comments for “‘Talking Apes with Big-Ass Spears’: Violence, Science, and Dawn of the Planet of the Apes”