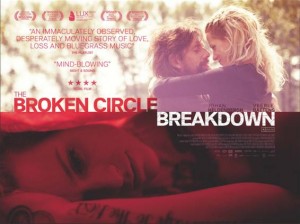 Uncertainty is an important aspect of scientific work and it is no secret that progress is a less straightforward path than what is presented in research councils’ calls for proposals, or national and EU strategy plans. The conflict between actual research output and expectations that are raised can be difficult to articulate, unless one finds stories that can make the complexity of life and new knowledge visible and accessible, such as in the Belgian film I am going to talk about in this blog entry.

The Broken Circle Breakdown (2012) is a gripping and heart-breaking fictional drama by the Belgian director Felix van Groeningen. It is an engaging movie that revolves around bluegrass music, beards, and tattoos, or so it seems at a surface level. The deeper you delve into the story of the movie the more you have to engage with meaningful topics such as love and harmony, and loss and bereavement.

The Broken Circle Breakdown is an intense movie about an unusual couple, bluegrass musician Didier (Johan Heldenbergh) and the tattoo artist Elise (Veerle Baetens). It is about how they meet and fall in and out of love. The movie is narrated in a non-linear fashion, with flashbacks woven together by a soundtrack of bluegrass music. The Broken Circle Breakdown features some wonderful musical performances and the soundtrack of the movie, scored by Björn Eriksson, has become Belgium’s best-selling original soundtrack. The film’s musical content was one of the many reasons why audiences were drawn to and engaged with the film. The Broken Circle Breakdown also won several awards on the international festival circuit and was nominated as the Belgian entry for the ‘Best Foreign Language Film’ category at the 86th Academy Awards.

Didier and Elise meet and fall in love at first sight. Didier plays banjo in a bluegrass band and has ‘been crazy about America all of [his] life’, Elise is a tattoo artist and the pair meet in her shop. Elise is revealed as a talented singer when she is invited to attend one of Didier’s concerts. She eventually becomes the singer for the band and their love affair develops both on and off stage. They have an unplanned pregnacy that results in the birth of their daughter Maybelle (named after American country singer Maybelle Carter). As a child she is diagnosed with cancer and treated with chemotherapy (referred to as ‘Captain Chemo’ in Maybelle’s presence). Unfortunately the therapy fails. The next step is to try experimental stem cell therapy but this aggressive course of treatment also fails and Maybelle dies.

Didier and Elise’s relationship is pushed to its breaking point as they each search for a reason for their child’s premature death. While Didier is a staunch atheist who sees nothing useful in religion, Elise willingly accepts spiritual worldviews and draws strength from religion. The relationship between science and religion is one of the film’s central themes culminating in a scene where Didier emotionally breaks down after he watches a news report in which former US president George W. Bush vetoes stem cell research due to apparent moral and religious concerns. Didier’s life-long obsession with the US as a ‘country of dreamers’ where anything is possible is tarnished by the government’s decision to restrict science he rants:

For months we were surrounded by stem cells and we had a feeling that medical science wasn’t going far enough. That the brakes had been applied. It’s a feeling you can’t explain and your child dies and then you hear bastards like that have been slowing everything down for years. For religious reasons… They call themselves pro-life. Technology for killing people knows no bounds but technology for curing people is a different story because embryos are grown outside of marriage. Embryos the size of a pinhead. The hypocritical bastard!

Following the death of Maybelle, Didier becomes increasingly, almost fanatically, anti-religious; he expresses his opinons in entirely inappropriate situations destroying the little bit of harmony left for when he and Elise are on stage making music together. When Didier rants about religious interference in science and research it is a sign of his emotional distress because he believes that his daughter could have been saved if there were no moral or religious obstacles to scientific research and progress.

The end of the movie is tragic and likely to stay with many viewers for a long time after the credits roll. For the majority of viewers who are unfamiliar with the intricacies of scientific research the film offers a personal perspective on stem cell research and how restrictions on research can affect individuals. Many of the viewers will have read or heard about stem cell therapy and research before, however, it is likely that specific stories about individuals are more accessible and memorable for many people, than serious and sometimes rather abstract descriptions of science, technology and research.

The movie is based on an original play called The Broken Circle Breakdown by actor Mieke Dobbels and Johan Heldenberg, who stars as Didier in the movie. The play was written one year after US President Bush used his veto against lifting the ban on stem cell research for a second time in 2007, saying that it ‘crossed a moral boundary’. Stem cell research was a hotly debated and controversial issue during that time in the US and also in Europe, particularly when it involved the creation, usage, and destruction of human embryos. Stem cell researchers came under attack from a range of religious groups. From the medical point of view, stem cell research could possibly deliver breakthroughs in the treatment of various serious diseases and for patient groups all over the world. Scientists working on this were hopeful that this controversial research area could improve the situation of many patients.

Johan Heldenberg has noted that he was politically motivated to write the character of Maybelle.

I wanted to say something about the Bush veto of stem cell research. It was a year before I wrote the play, but it was constantly on my mind. I kept thinking how could he do that? […] I’m not here to criticize any American president. This is the European point of view, of course. I don’t live in America, but in Europe, we were scared at that time because of the war on terror and the axis of evil. All these words came across the ocean and it was very frightening. I guess that’s how Maybelle took over the story. (see full interview here)

In contrast to a documentary the fictional movie format of The Broken Circle Breakdown – which involves elements of tragedy, drama, romance and maybe even a bit of a musical – allows for the address of a controversial issue such as stem cell research and the relationship between science and religion from a human, emotional and personal point of view. Its intention is not to dissect the debate about stem cells. The opportunity that a fictional movie such as The Broken Circle Breakdown provides is to address and appeal to the empathy of the viewers and make them think about two different points of view, with Didier representing a atheist perspective and Elise representing a more spiritual and religious worldview.

The director Felix Van Groeningen explained in another interview that the movie itself does not have a particular stance on stem cell research, but that it is the intention of the movie to present more than one angle of the ethical debate, focusing on human points of view:

This movie isn’t propaganda or anything. If anything, it’s pro showing both sides. Johan saw a similar story on TV and it made him angry enough that he wanted to do something about it. It’s a story written by a man who has real issues with something that’s going on in the world and is smart enough to think about it, talk about it, and show both sides of it.

From this point of view The Broken Circle Breakdown can be seen as providing additional and possibly marginalized voices and viewpoints about a controversial research and biomedical issue. In general the voices of the researchers and scientists are heard in public debates and journalistic media since they speak with the authority of the experts of the subject matter. Politicians such as George W. Bush are in an extremely powerful position, since their view will be reported across the international press, but they are also in the unique position to act and decide what will be allowed and what will be prohibited.

The Broken Circle Breakdown allows sheds light on the views of the affected, even if they are fictional. It offers emotional entry points to the debate and maybe also an idea about what feelings may be invoked in the lives of ordinary people, such as Didier and Elise.

Popular culture and entertainment media do include and connect to topics, themes and issues from the world of science, medicine, technology and research. Of course, they do not portray these issues neutrally, but they often attach names and faces, stories of people in particular circumstances – in other words certain ways of approaching, framing and interpreting these topics. Elements of science, medicine and technology are woven into particular stories that often address questions of meaning, identity, power, and values that make these stories relevant for large shares of the population. In that sense they can illustrate the complexity, consequences, and different layers of meaning that are involved at the many different sites where science and research actually meet society members. When science and technology are represented in popular culture texts scientific and technological ideas and terminology become ‘rooted’ in the everyday life of the citizens. They encounter these ideas and terms in particular contexts and they are often embedded in stories about people.

One may add that many people, and not just those with an interest in science, voluntarily consume science-based entertainment media, such as soap operas, popular music, fictional movies, novels, and comic books. For researchers and scientific institutions this means that it is of interest and relevant to follow up on how their area of expertise is covered not just in the news, but also in entertainment media and popular culture in general. It is likely that these accounts do inform public opinion about science and technology.

What characterizes popular and folk narrative traditions is that one story (like this film) is one variant of a further corpus of narratives. It is the co-existence of variants that constitute folk narrative tradition, and its meaning and function depends on context, when and where and why the narrative is presented. As such, the corpus of popular and entertainment narratives is a potential resource for elaborating complex issues. And if the narratives are prudent and thoughtful, as the ones presented in The Broken Circle Breakdown, they can add voices and viewpoints to public discussions that transgress other points, which are formulated within the dichotomous boundaries of other formats, disciplines and traditions.

← Welcome back to humanity. Now you get to die: Vampires and… Science
The Playing God Project: Exploring the Interactions Among the Biosciences, Religion, and Entertainment Media →